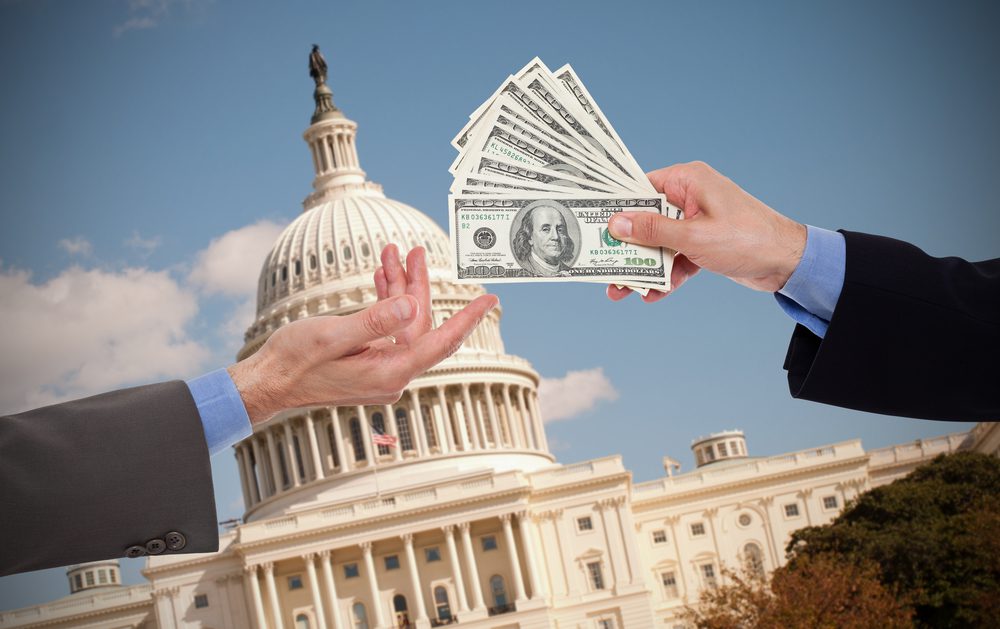 “It’s time we acknowledge that not all Democrats are the same. That a Democrat who takes corporate money…cannot possibly represent us,” freshman Congresswoman Alexandria Ocasio-Cortez said in her 2018 campaign kickoff video.

In recent months, there’s been an uptick of politicians pledging to reject corporate PAC money, and it’s become a litmus test of sorts for the Democratic Party.

Presidential candidates Bernie Sanders, Kamala Harris, Elizabeth Warren, Cory Booker, and Kirsten Gilligrand have all signed the pledge, and their strategy is to show they are beholden to the people instead of the super wealthy, corporations, and lobbyists. It’s a strategic move designed to rebuild the electorate’s trust in  politicians, and while it might sound like the right thing, it turns out some Democrats are trying to pull one over on us.

Here’s the catch: Even with this pledge, special interests and dark money donors are still finding sneaky ways to get their money into our politicians’ coffers. This corruption can occur through industry fundraisers, individual donations, political parties, and candidate self-funding, among other means.

Gillibrand received over $80,000 from pharmaceutical giant Pfizer for her latest Senate campaign, $5,000 of which came from the company’s PAC. The other $75,000? That came from Pfizer employees. CNBC reported that in March of 2019, Gillibrand would attend a $1,000 – $2,700 per ticket fundraiser run by Pfizer executive Sally Susman for the Senator’s 2020 Presidential campaign. How many thousands of dollars did Gillibrand earn that day? And, perhaps more importantly, what does Pfizer expect in return?

The people are told what they want to hear and hope. But when Pfizer comes calling, money talks. The Supreme Court decision on Citizens United v. FEC made money speech. And in an age when our representatives are more concerned about being re-elected than fighting for their constituents, it is no surprise that money negates the will of the people.

Whether it’s PACs, industry fundraisers, political parties, or large-dollar individual donors, this is legalized bribery and it most certainly is not in good faith. It is an unspoken quid pro quo, and our politicians know it.

It’s no wonder then why 65% of Americans support legalizing marijuana, but Congress does nothing. When it comes to universal background checks for gun purchases, 93% of voters are in support. Yet again, Congress does nothing. Even the President walked back his previous support of expanding gun background checks after meeting with the head of the NRA following the Dayton and El Paso mass shootings.

Booker also has a long history of taking corporate PAC money and proved his devotion when in 2017 he helped kill a bill proposed by Sanders to lower pharmaceutical costs. But, to make matters worse, this corruption is masked. Between the years 2013 and 2018, PAC money made up under 8% of Booker’s campaign committee contributions, while individual donors made up just over 77%. That’s $2,538,076 from PAC contributions verses $26,010,229 from individual donors.

That’s not chump change, but obviously there are limitations on PACs and how much they can contribute—though they can still donate to other candidates, PACs, or committees.

However, PACs consist of numerous people who can donate up to $2,800 to a candidate’s campaign per election or $5,600 per year for the primary and general elections combined. They can also contribute to state, district, local, or national party committees, and to as many PACs as they want. Then there are Super PACs which can collect unlimited donations, including from corporations and labor movements.

Granted, single-candidate PACs (as opposed to multi-candidate PACs) can contribute the same amount as individuals per year. But this is where transparency comes in.

Fortunately for us, the Federal Election Commission (FEC) requires all registered presidential candidates to disclose the money they’ve raised, and any campaign donations of $200 or more are required to be reported to the FEC, according to OpenSecrets.

Less than 10% of Americans have ever contributed to a campaign. And that percentage drops significantly lower when looking at contributions of $200 or more, which is unsurprising as 40% of Americans can’t even afford a $400 emergency.

Meanwhile, according to Pew Research, 44% percent of the voting eligible population does not vote. The failure of our representatives is evident and we must restore the integrity of our democracy if we want it to survive.

Power to the People

Political campaigns raise millions of dollars from a tiny percentage of the people. This is why it’s so important for candidates to release their donor records, specifically individual donors. Beto O’Rourke, for instance, raised $6.1 million on the first day of his campaign, more than any other presidential candidate. However, he was reluctant to release how many individual donors he had and what their average donation was.

Comparatively, Sanders raised $5.9 million in the first 24 hours of his campaign. These funds came from roughly 224,000 individual donors with an average donation of $27 dollars. In the first six weeks, 525,000 individuals donated to Sanders at an average of $20.

The problem? A tiny percentage of Americans contribute more than $200 to political campaigns and that’s just the tip of the financial iceberg. That doesn’t include the $5,000 they can donate per year per PAC, which is then donated on their behalf.

The Sanders campaign often claims it’s building the largest grassroots movement in our nation’s history, based on small dollar donations and supported by over one million volunteers. One campaign slogan states: “Not me. Us.”

While it’s a positive sign that such a campaign can thrive in our current political environment, it’s not a solution to the ever-present problem of dark money and special interests buying our politicians.

As the Sanders campaign slogan suggests, no one person can solve this problem. We all need to get in the fight—and that’s where Wolf-PAC steps in.

Wolf-PAC is a group of everyday Americans fighting to return our government to the will of the people. We believe the best option is to go above the destructive Supreme Court decisions and add a 28th amendment to the U.S. Constitution to restore integrity to our democracy.

We can no longer wait on our politicians to take action on the issues that directly impact our lives.  If they really cared about their constituents, Democratic or Republican, they would have done something already. We need to take note from the protests in 2017 against repealing the ACA and kicking thousands of Americans off their healthcare, the teacher strikes that took the country by storm last year, or the UAW strike that continues to escalate after General Motors dropped the healthcare plans for roughly 49,000 employees.

We are stronger together. We can hold those in power accountable. And we must take action.

We need your help to not just mitigate the problem but fix it so that our politicians are beholden to We the People. Be a part of history and join us in fighting for our democracy by donating or volunteering in any way you can. Stand up. Fight back.