Citizen leaders and organizations from across the country gathered to discuss 28th Amendment strategies at the 2nd annual National Citizen Leadership Conference (NCLC). 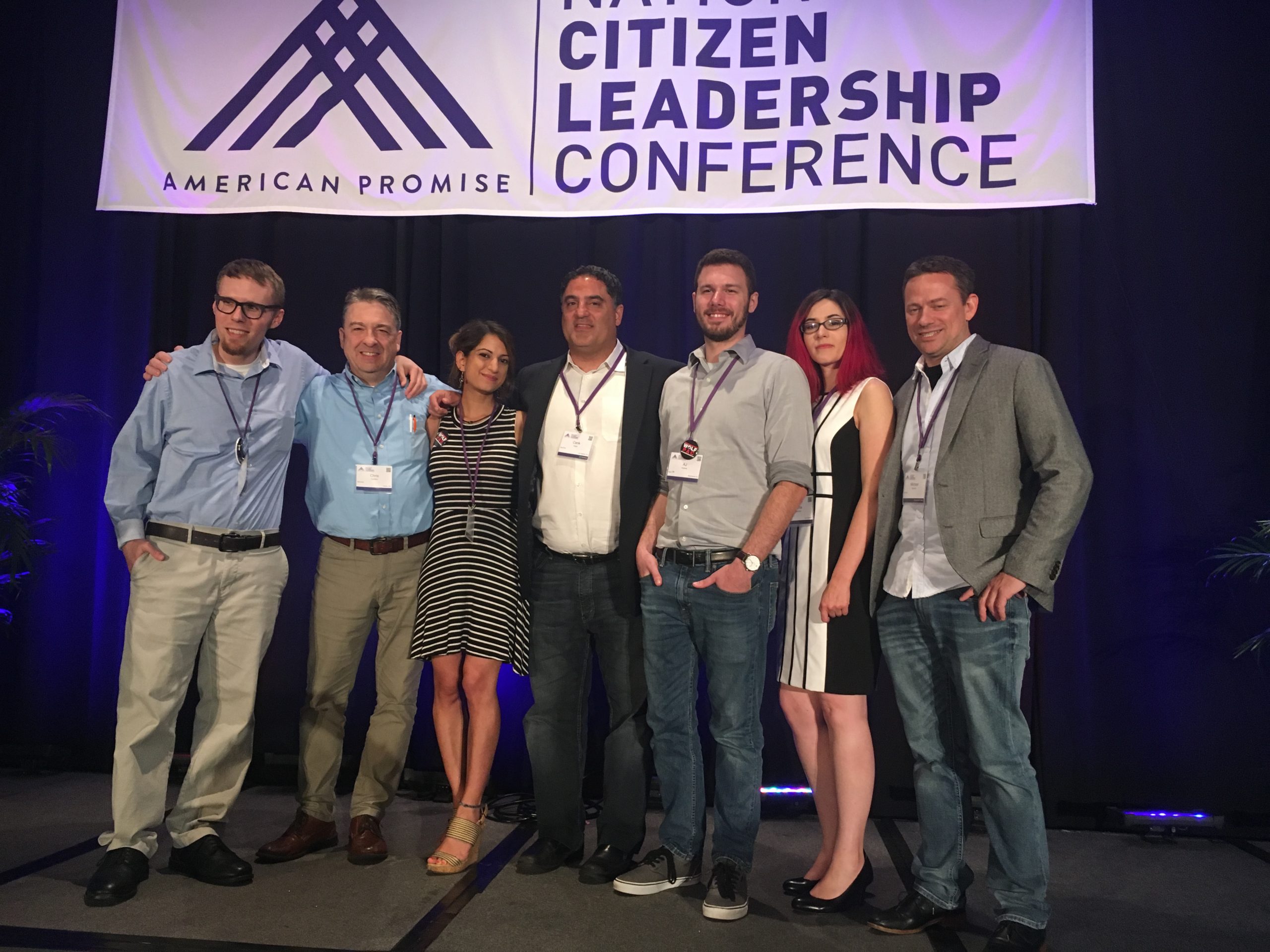 Last weekend, Wolf-PAC joined around 500 citizen leaders from across the country at the 2nd annual National Citizen Leadership Conference (NCLC) held by American Promise in Washington, D.C. The event’s theme, Power Up Together, is a rallying call for organizations focused on getting a 28th Amendment to remove the corrupting influence of money from American politics to connect and work together.

The conference, which took place from Friday, June 22 to Sunday, June 26, featured several presentations from high-profile speakers, roundtable discussions, strategy sessions, and debates. Here are some of the highlights.

NCLC speakers laid out the country’s most pressing issues, but they also spoke with passion and confidence in the ability of American citizens to solve them together. Some even described their personal reasons for getting involved in the fight to restore free and fair elections.

Leaders from the business community hosted a round table discussion to explain why they also support getting big money out of politics. Speakers included Matt Patsky, CEO of Trillium Asset Management in Boston, Elizabeth Doty, Founder of Leadership Momentum in San Francisco, and John Wass, CEO of Profit Isle in Boston.

According to the panel, business people are sympathetic to the issue because most enjoy competing in the free marketplace. When the rules of the game are rigged an inferior product can dominate the market. The 28th Amendment will also establish a more even playing field for business in the long run, making sure innovation and good ideas win.

Bill Moyers, renowned journalist, gave one of the most moving and memorable speeches of the conference, using quotes from some of his favorite authors to explain how both Democrats and Republicans have sold out the American people and endangered democracy. He stressed the importance of working together to get the 28th Amendment. 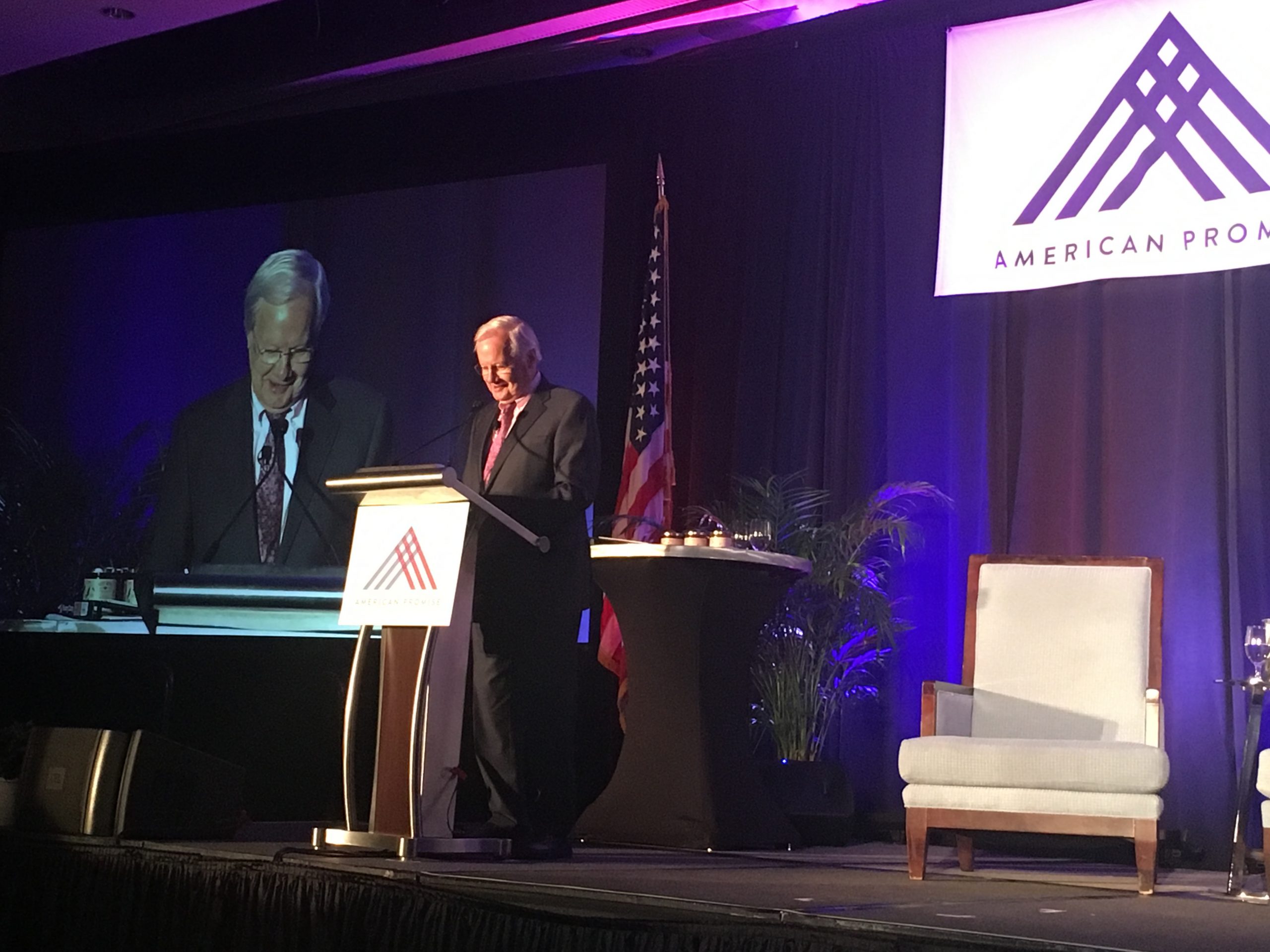 Our current movement “is the fight of our lives because the republic is fighting for its life,” he said.

John Adams, Moyers explained, was a student of tragic history who warned that the average democracy lasts about 250 years because “what can be gained can just as easily be lost.”

But Moyers remains hopeful because the founders built checks and balances into the U.S. Constitution to protect us from ourselves and preserve democracy. The issue of money in politics is also one that almost all Americans can agree on.

“For the first time in history, a social movement has the majority of Americans behind it. Nearly all Americans, including a large majority of Republicans, favor this call,” he said.

Getting the Message Out

Ben Cohen, activist and co-founder of Ben & Jerry’s, talked about the importance of messaging. “You need to put a message out over and over again in order for people to perceive it because we live in a culture where people are bombarded with thousands of messages a day,” he said.

That’s what his Stamp Stampede movement aims to do. Dollar bills change hands often, which means the stamped messages protesting big money in politics will be seen by a large audience. Cohen emphasized the importance of public backing in any big movement, reminding conference attendees of a well-known Abraham Lincoln quote.

Nina Turner, President of Our Revolution, former Ohio State Senator and American Promise Advisory Council member, gave a passionate speech about the urgency of getting money out of politics. “All that we love is in danger,” she said. Turner reminded us that we can’t fix any issue until our political offices are no longer available to the highest bidder.

She encouraged everyone to keep fighting, even when the odds feel like they’re against us, because we can prevail.

“When conscious-minded people are united together and determined to be the change, there is no force on earth that can stop us,” she said.

Watch the full video of both speeches here.

During the conference Cenk, Mike, and our volunteers worked hard to make connections and explain the value of using all available tools of democracy, including the amendment convention. By the closing panel on Sunday it was clear their efforts paid off. 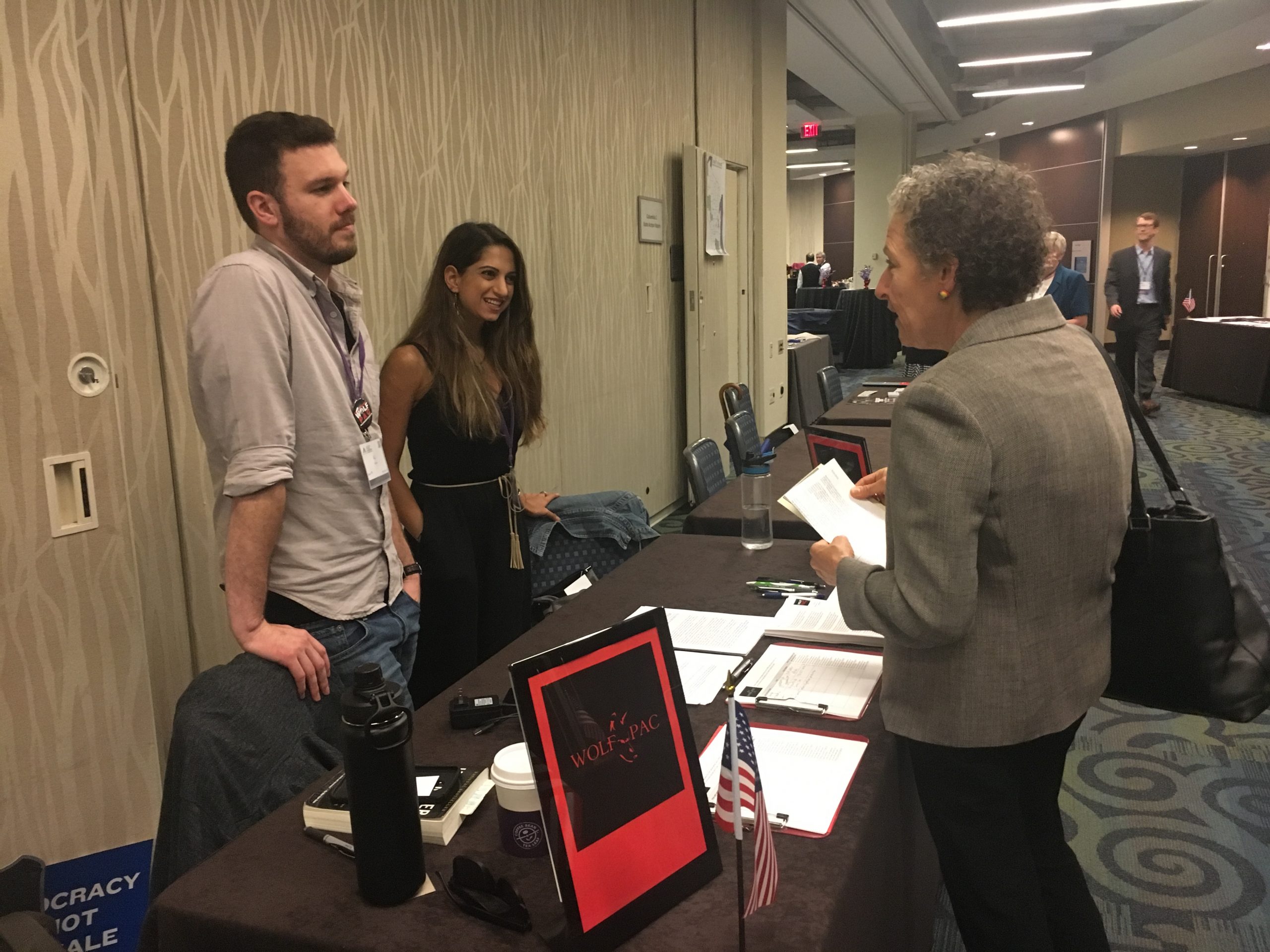 Cenk went head to head with Viki Harrison, Executive Director of Common Cause New Mexico, in the Amendment Convention: Pro and Con panel. In a spirited debate that was moderated by Jeff Clements, Cenk and Ken Chestek, Professor of Law, University of Wyoming; Chair, Wyoming Promise, were able to change the opinion of some attendees from concerned about to in favor of the convention strategy.

Audience members were asked to take a poll before and after the panel. About 40 people ranked the following four questions as either “not at all” or “very much so”:

Support in favor of using the convention strategy (question 3) polled at 6.1 before hearing points from both sides and 7.9 after.

Cenk for the win! 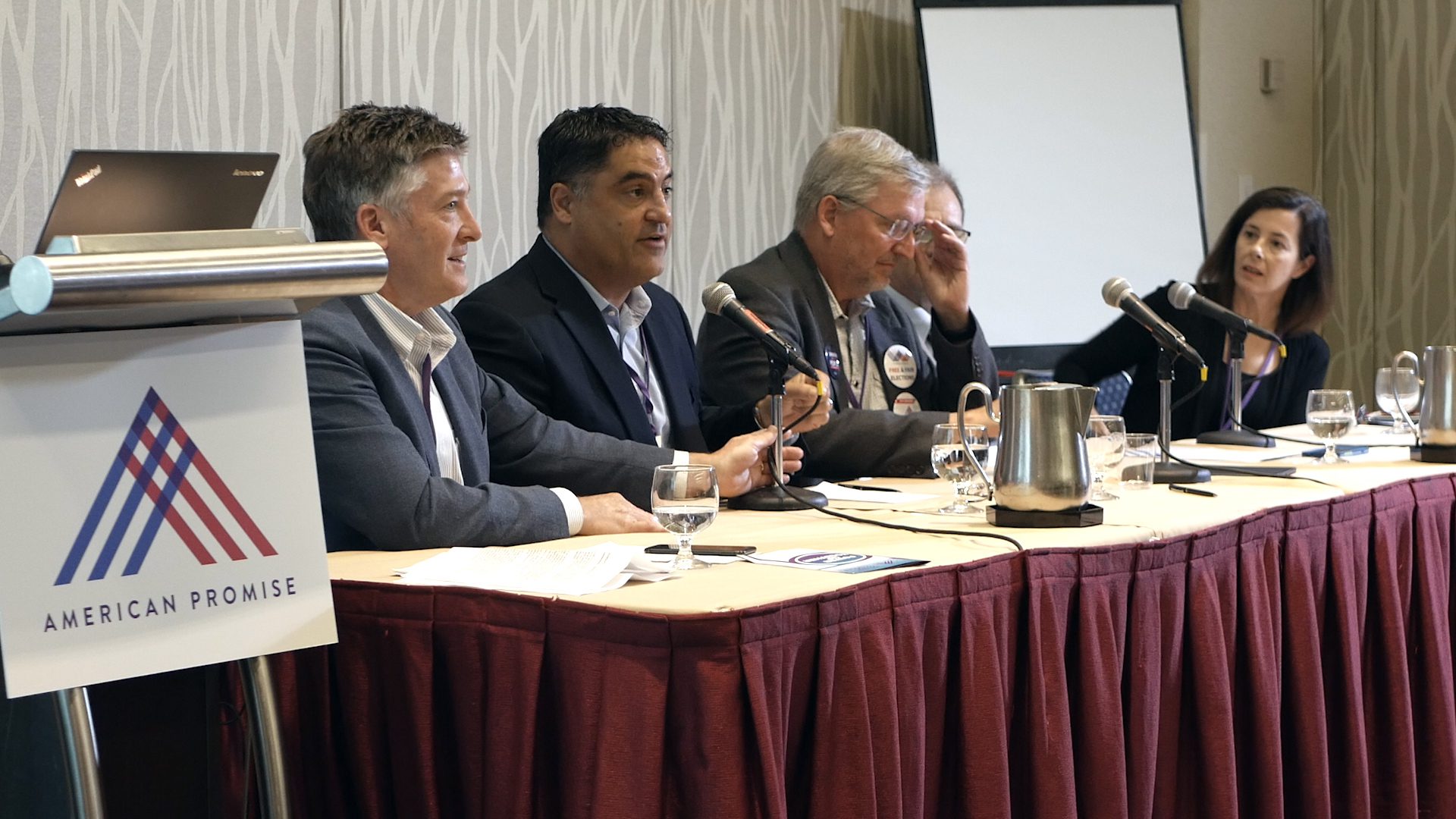 Watch the full debate, recorded by The Young Turks crew, in the video below. 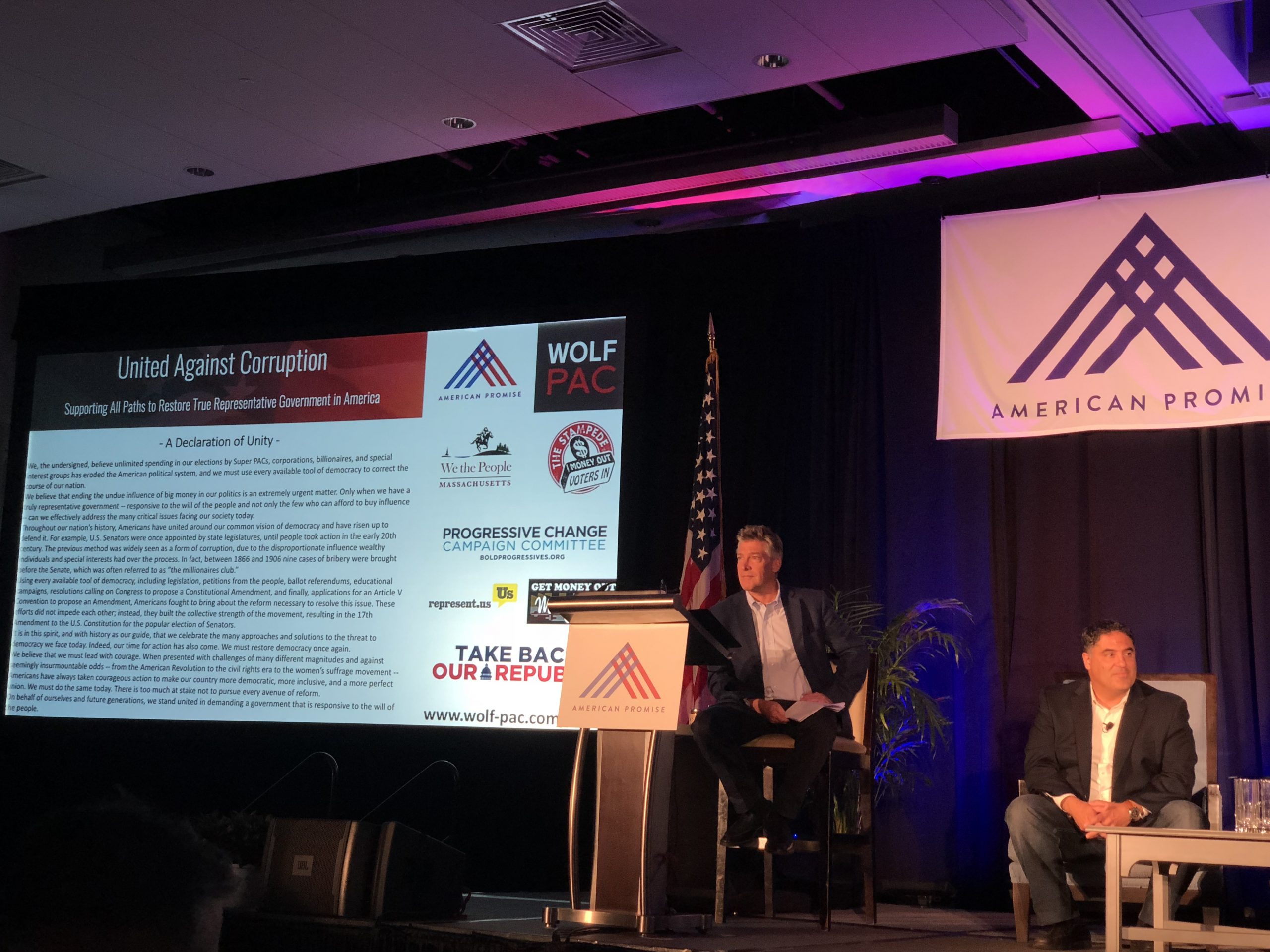 As part of the NCLC Closing Plenary, Cenk unveiled Wolf-PAC’s new Declaration of Unity letter. These eight organizations have signed it, agreeing to fight together using “every available tool of democracy to correct the course of our nation.”