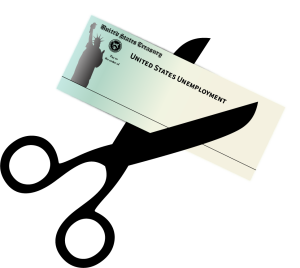 A few months ago, unemployment benefits that had helped millions of Americans during the ongoing COVID-19 pandemic were allowed to expire. That included the extra $300 provided by the federal government, and assistance for gig workers and the long-term unemployed.

This is a particularly harsh example of how our government is incentivized to serve the special interests of the wealthy over the needs of the American people as a whole.

During COVID, supplemental unemployment benefits were vital to survival for many

The extra unemployment benefits from Congress played a key role in supporting Americans during a period of extreme economic hardship. In March 2020, Congress responded to an unemployment spike not seen since the Great Depression by adding $600 a month to regular unemployment. In December 2020 and again in March 2021, these benefits were reduced to $300 a month but were extended.

The supplement proved to be critical to survival for many Americans. It prevented millions from slipping into poverty early in the pandemic. It lifted over a million people from poverty in January 2021 alone. Recipients were also less likely to report symptoms of anxiety or depression.

In September, these programs were allowed to expire. Or in other words, they were killed by a lack of political will to extend them. The White House refused to ask Congress to extend benefits because in its view, the economy had recovered. And the administration seemed to finally agree with business lobbyists that enhanced federal aid was to blame for labor shortages.

Despite what special interests say, Americans continue to struggle

The feeling that the economy has recovered doesn’t reflect the reality of millions of Americans, however. A significant percentage continue to struggle to pay bills and put food on the table, as well as trying to catch up on rent and mortgage payments. In addition, justified caution over COVID variants and disrupted supply chains have delayed our economic recovery and growth.

During this period of profound uncertainty and fear for all Americans, taking away a lifeline that millions rely upon is cruel.

We also know that ending unemployment benefits has not significantly improved the economy or labor shortages.

As a result, ending enhanced unemployment programs contributed to a decrease in consumer spending because millions of Americans suddenly had considerably less money to spend. In fact, pandemic stimulus and unemployment benefits allowed Americans to spend more, fueling a demand for goods (which partially explains the current rate of inflation). Recent data shows a slow-down in retail spending and declining consumer sentiment now that families have depleted their stimulus and unemployment reserves.

This suggests that ending unemployment benefits didn’t have the intended outcome. From both a humanitarian and an economic perspective, this decision doesn’t make any sense.

So why on earth did this happen? Think about who wields power and actually has their interests represented and fought for in Washington DC. Business interests (like the U.S. Chamber of Commerce, one of the most prolific lobbying interests in Washington) lobbied Congress and the White House for months to end the expanded unemployment benefits. The Biden administration originally argued against ending benefits but caved after months of pressure from well-funded business interests.

This corrupt system of incentives is not new, but it has certainly been getting worse. This system is having greater and more terrible consequences for you and your fellow Americans. We can reverse this power structure and put The People at the center of our government’s priorities.

It’ll be very hard work, yes, but there’s no chance that it will happen if you don’t get involved.

Wolf-PAC is driven by volunteers freely donating their time. This work is brought to you by the Communications Team.