Lessons from Politicon 2018: How to Communicate Effectively When You’re on Opposite Sides of the Political Spectrum - Wolf-PAC
Skip to content

Tips from the non-partisan political convention for starting a constructive conversation with a Republican or Democrat, to find common ground on an issue. 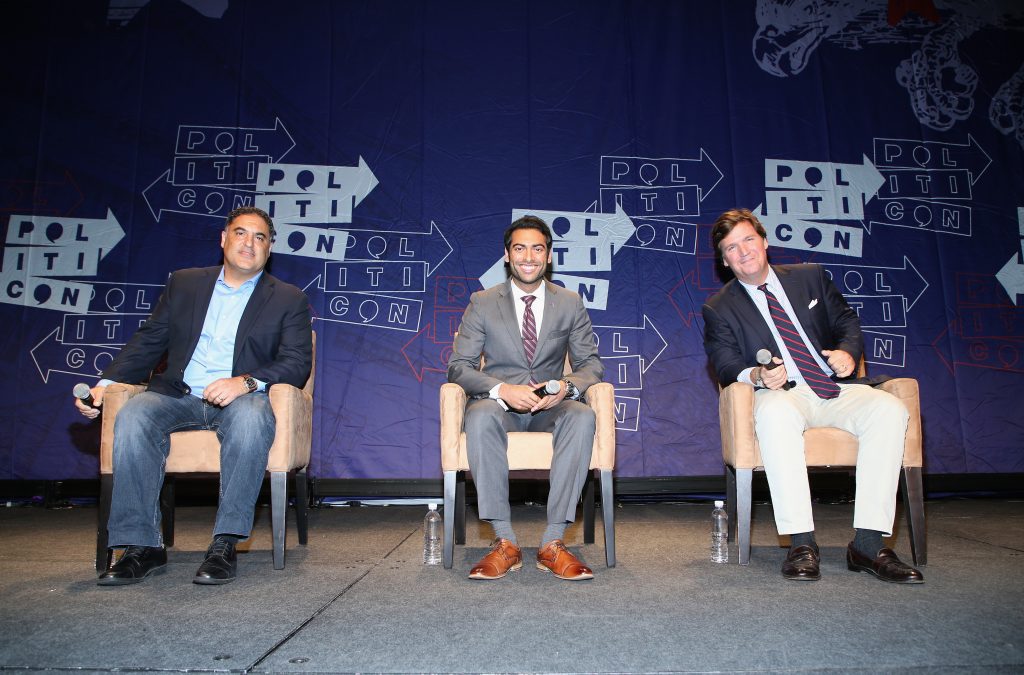 People with political views from far-Right to far-Left, and everything in between, came together for Politicon at the Los Angeles Convention Center. The 4th annual non-partisan political convention, also known as the “Unconventional Political Convention,” featured debates, panels, film screenings, comedy and podcasts with prominent voices on a wide array of political topics.

Part of Politicon’s appeal to attendees is being able to see two people with opposing views sit on a panel together and engage in a debate. In such a divided atmosphere, many have lamented that it’s hard to find common ground, especially in politics. But between the heated debates and disagreements, there were constructive conversations and unexpected agreements.

During a panel titled “How Are We Going to Get Along?,” Kyle Kulinski, left-wing host and producer of YouTube talk show Secular Talk, and Charlie Kirk, self-described Libertarian and founder and president of Turning Point USA, both spoke out in agreement against war. “You’re anti-war, I’m anti-war too, and we can agree on that,” Kulinski said, with Kirk adding, “I think war is a horrible thing.” Kulinski then joked that the two agreeing on something might ruin their careers, to which Kirk responded, “we both have principles.”

See the full panel discussion below.

Another pair that found common ground during a debate was Cenk Uygur, founder of The Young Turks Network and Wolf-PAC, and Tucker Carlson, the host of Tucker Carlson Tonight on FOX. In a discussion about immigration that segued into employment, the two agreed that large corporations aren’t being held accountable. Uygur said “Apple makes a nice phone, but that doesn’t mean they should pay zero percent in taxes”, to which Carlson replied, “exactly, amen!”

Watch the full debate below.

These types of productive discussions are encouraging for Wolf-PAC, an organization that has American citizens of all political views work together in its mission to restore free and fair elections.

Despite having common ground, it can be hard to have a productive conversation when you disagree on so many other issues. But it’s not impossible. Here are some lessons from Politicon on reaching across the aisle.

Keep it About the Facts

If you’re passionate about an issue, do your research. Be able to back up your statements with facts and explain the information in a way that will help the other person understand it. When someone is skeptical, share your sources with them.

In the case of issues that are known to have wider public support, such as campaign finance reform, the goal is to show the other person how the issue affects them.

“All you have to do is state the facts about getting money out of politics and frame [the issue] in a way where everyone gets it,” Kulinski said. “Let everybody know what the reality of the situation is and very quickly you can build bridges and have allies on the other side.”

Instead of launching into a debate or leading with a talking point, find a way to relate to the person you’re speaking with. That could mean having a conversation about something else first in order to establish common ground and understanding. Show them you have the ability to understand and share their feelings.

“We have to have empathy,” Celeste Headlee, award-winning journalist, professional speaker and author of We Need to Talk: How to have Conversations That Matter, said in a panel titled “Don’t Raise Your Voice: Improve Your Argument.”

“Life is really tough. It’s tough for everybody. What you’re trying to find is common ground when the odds are already stacked against you,” she told attendees.

Start Where You Agree

It might be tempting to confront someone and launch into an immediate debate over why your position is the correct one, but Sara Gorman, public health and behavioral science expert and author of Denying to the Grave: Why We Ignore the Facts That Will Save Us, advises against it.

In many hot-button issues there is often more common ground than either side might be aware of. She points to the debate over giving childhood vaccinations as an example, explaining that both sides do share the same goal – keeping their children safe.

Starting with the goal allows everyone to take a step back and think about the problem that needs to be solved. This opens up the possibility of working together. “People start to become interested in joining a new group, and then group psychology kicks in and makes it a little bit easier for people to work together,” Gorman said.

Be Mindful of Your Audience

It’s okay to feel strongly about political issues, but if you’re trying to talk with someone whom you know feels differently, take steps to make sure you’re keeping things neutral and friendly. For example, wearing a Bernie Sanders t-shirt or a Make America Great Again hat is likely to set the tone for disagreement right away, according to Headlee. She recommends leaving such items at home when you’re trying to engage in productive conversation.

In some cases, it’s possible to use laughter as an ice breaker. “Comedy, or any art, is a way to open people’s minds to ideas that they wouldn’t be open to hearing when it’s just coming from straightforward debate,” said Adam Yenser, conservative comedian and writer for The Ellen DeGeneres Show.

Yenser performs for both liberal and conservative audiences and said he likes the challenge of talking to a group that doesn’t agree with many of his views. “It makes you write harder as a comedian when you’re trying to bridge that gap from the other side,” he explained.

Overall, try to be aware of how your behavior and demeanor could be perceived by the other person. “Pay attention to your own emotion and reaction when you’re having these conversations,” Gorman said.

Rena Goldman is Wolf-PAC’s resident journalist and the editor of The Daily Wolf.

One thought on “Lessons from Politicon 2018: How to Communicate Effectively When You’re on Opposite Sides of the Political Spectrum”